Why Are My Presidential Candidate’s Ads Showing Up by Jihadist Videos on YouTube?

The Digital Citizens Alliance Finds YouTube Running Ads for White House Hopefuls from Both Parties Next to Videos for Stolen Credit Cards, Malware, and Terror Sympathizers

Washington, DC – Ads for Presidential campaigns, as well as Super PACs supporting the candidates, are running next to videos for illegal and/or illicit products and services on YouTube. The Digital Citizens Alliance, a Washington, DC based nonprofit consumer advocacy group, calls on YouTube’s parent company – Google – to take action. The tech titan needs to take immediate steps to keep candidates’ ads away from YouTube videos marketing violence, crime, and destructive behavior.

“This is not what these candidates wanted when they bought ads on YouTube,” said Adam Benson, Deputy Executive Director of the Digital Citizens Alliance. “There’s no candidate – for President, City Council, or Dog Catcher – that wants their face showing up next to videos with jihadist overtones, pictures capturing private moments of hackers’ victims, or stolen credit cards. Right now, candidates can’t be sure where their ads are showing up on YouTube. Google needs to take action to stop this immediately.”

Examples of the DCA’s findings can be found in their new report, Fear, Loathing, and Jihad: How YouTube is Pairing the 2016 Candidates with the Creepy, the Corrupt, and the Criminal, published today on the group’s website. Researchers from the Digital Citizens Alliance searched through videos including several supportive of the terrorist group ISIS, marketing stolen credit cards, and demonstrating how to spread malware. The researchers went to New Hampshire, South Carolina, and Virginia, in the days leading up to the primaries in each state, to review the videos. During these trips, researchers found ads for the Democratic candidates, former Secretary of State Hillary Clinton and Senator Bernie Sanders, as well as ads supporting Republican candidates Donald Trump, Senator Ted Cruz, Governor John Kasich, and former candidates Senator Marco Rubio, Senator Rand Paul, and Governor Chris Christie.

“Google is making millions from campaign advertising, and sharing the candidates’ money with bad actors posting videos for illegal or illicit activities,” Benson said. “This is just the beginning. Wait until the Congressional races and state races heat up. Unless Google takes action quickly, terrorist sympathizers, hackers, and credit cards thieves are in line to get money, indirectly via the YouTube Partner Program, from our current and future leaders. If these bad actors are getting one penny from our Presidential candidates, it is one penny too much.

“We expect Google to use technology to solve problems, not to create them.”

Below are some examples of our findings: 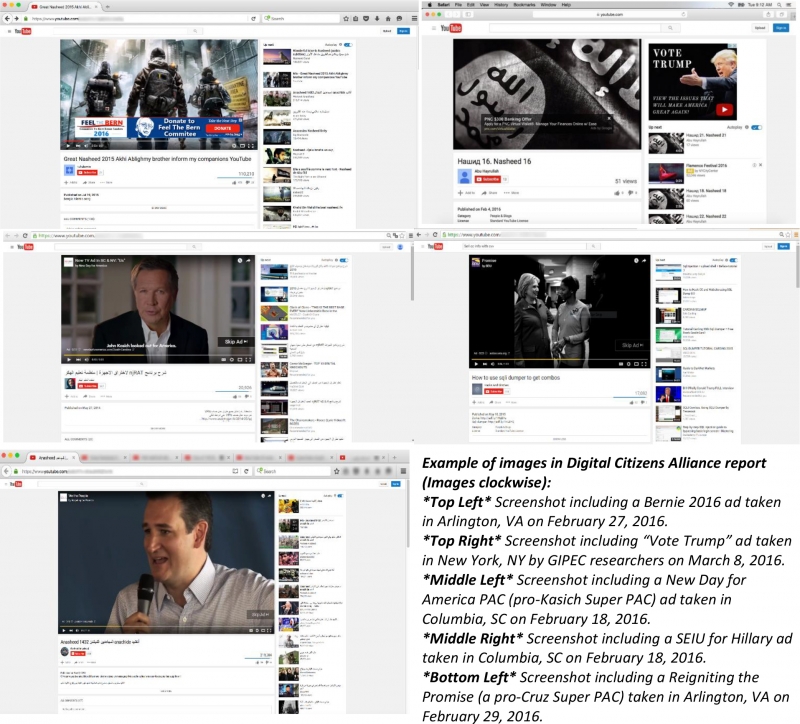