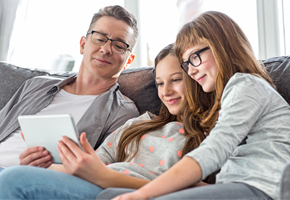 The newest adults worry about the teens immediately behind them. A new poll shows that eight out of ten 18-year-olds worry that younger teens are in the crosshairs of online predators looking to sexually exploit young people.

The alarming number of young adults concerned for teens, a finding from an Ipsos poll commissioned by UNICEF, is unprecedented. Imagine if 80 percent of retiring football players said they worried about current players would experience multiple concussions.  If that was true, many parents would hear that and pull their kids off the football field.

Of course we can’t pull our kids off the internet – nor do we want to. For all its faults, the internet provides amazing opportunities for young people. However, these new findings tell us that we have to be more vigilant than ever before about educating kids on dangers lurking in the darkest corners of the internet. We need to go beyond discussing the obvious dangers from sites pushing illegal gambling, pornography, and drug use, but talking about activities we have perhaps brushed off because we don’t see the immediate physical threat - like sites providing stolen movies and music. Unlicensed movie and music sites are a favorite tool of hackers.

The Digital Citizens report Digital Bait showed consumers are 28 times more likely to get malware from a content theft site than on similarly visited mainstream websites or licensed content providers.

That malware is much more than just a nuisance slowing down your device. In our July 2015 Selling Slaving research report, Digital Citizens showed how hackers use unlicensed movie and music sites to spread traps designed to capture young people.  Kids go there to get content easy and cheap, but they end up with malware which allows hacker’s to control their devices. We saw how hackers selling “slaved” devices – one hacker asked for $5 for a girl’s device and $1 for boys’ devices.

We found experienced hackers giving advice to hacker wannabes on how to use content theft sites to capture “slaves” – or young people who can be exploited and forced to make sexually explicit videos. Statistics show incidents of “sextortion” are rising rapidly. The Brookings Institution recent researched 78 cases and found that 71 percent involve only victims under the age of 18. That becomes even more frightening when you consider the FBI’s figures showing at least one victim attempted or committed suicide in 28 percent of all sextortion cases the bureau investigated in 2015.

In total, the cases Brookings examined had almost 1,400 victims. Researchers say that figure is “the tip of the iceberg” with the actual number being somewhere between 3,000 and 6,500.

The promise of big bucks and easy prey has produced increasingly sophisticated traps. It is getting harder to tell the bad sites, often made up of recent releases and advertisements from blue chip companies (which often don’t even know ads are being used this way), from the good ones. Increasingly, these sites will pass the eyeball test while the malware onboard is designed to sneak past firewalls and anti-virus programs.

Its not okay to brush off visits to unlicensed movie and music sites as just kids being kids. The newest adults have a perspective and experience that we can’t ever match. If they say it is dangerous online for children, we need to listen and act.

What can we do to help children understand the danger facing them in a constructive way?